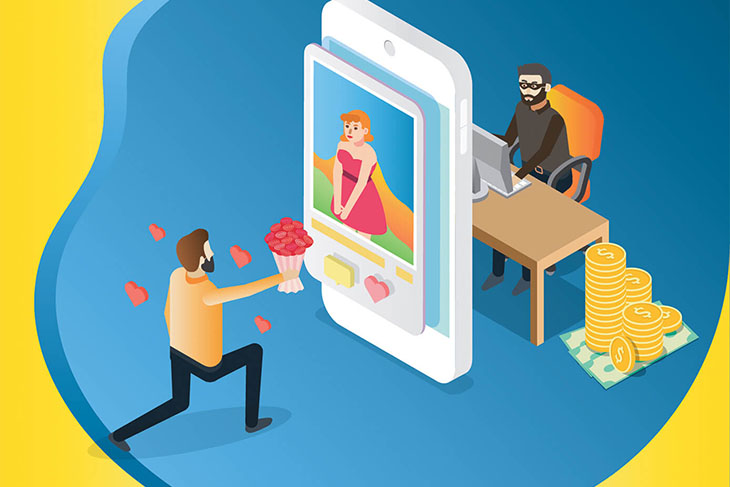 If you’ve ever spent any appreciable time using online dating sites, you may be familiar with profiles that don’t seem quite right. Maybe the profile pictures don’t seem to match the written descriptions, or the language seems to be baiting you into something more than dating. It’s often difficult to put your finger on what it is that feels “off” but you simply don’t get a good feeling about the profile.

You’re lucky. Your instincts serve you well. It’s an unfortunate reality that some of the people you encounter on popular dating websites aren’t what they appear to be. In 2014, just the dating website scams that were reported to the FBI totaled $86 million in losses. These scammers post enticing profiles intended to fool unsuspecting users into engaging in conversation, often with nefarious purposes in mind. The reasons why scammers post fake or misleading profiles can vary, but what’s certain is that avoiding them at all costs is the best course of action.

Unfortunately, not all scammers are easy to identify. Some red flags can fly below your awareness if you’re not paying close enough attention. And some people simply aren’t as adroit at spotting scammers as others are.

That’s why we’ve created this article. We’re hoping to equip everyone with the knowledge they need to sort honest profiles from bad apples. Part of safe dating online is knowing how to avoid the traps these scammers lay so that you don’t fall prey to their schemes.

Once you’re aware of the things to look for, you’ll probably start seeing scammers more frequently, and that’s good! That doesn’t mean there are more of them out there suddenly. It just means that you’re getting better at identifying them.

With that in mind, here is an exhaustive list of the many red flags you can look for to keep scammers at bay.

It happens, but it’s rare that someone gets professional photos taken for a dating profile. If the photo you’re looking at appears to be a high-end, professional photo taken of a model, it likely is. And it doesn’t belong to the person that created the profile.

Most dating sites and apps offer built-in methods for contacting profiles you’re interested in. Scammers are usually more interested in having people contact them off of the site, so they can side-step security protocols. If you find someone posting phone numbers, email addresses, Skype handles and other offsite contact information, be skeptical.

3. The Profile Lists Its Location as Nigeria

We’re not saying that all Nigerian accounts are scammers. However, the dating site Seeking Arrangement, in conjunction with background-screening company TC LogiQ ran statistical analysis on 60,000 of their banned profiles and found that 28% were from Nigeria, 23% were from Ukraine, and 21% were from the Philippines. If you find profiles from these countries, check for other red flags. If you find some, you’ve probably found a scammer.

4. The Profile Waxes a Bit Too Romantic

Scammers like to heavily pepper their profiles with words like caring, honest, kind, warm, loving, and they usually say they’re seeking a long-term or serious relationship. Of course, on a dating website where this is the goal, the profile could be an honest person, unless the language is particularly over-the-top. But if you find this sort of language on a more casual site, where hookups and anonymous flings are the goal, then it’s a red flag.

This is a particularly telling red flag if the profile description would lead you to believe the person should be a native English speaker. Broken English indicates that the language isn’t the person’s primary, and barring a good explanation, makes it likely the profile was created by someone outside of the country looking to scam hapless victims.

6. The Profile Starts Most Sentences with “I”

Scammers sometimes create profiles with computer algorithms that string a random list of prefab bio statements into a unique profile. “I” statements like, “I love to play golf” and, “I love going out to dinner” can be strung together in any order and still make sense.

This is a fairly strong indicator of a fake profile because people simply don’t speak, or write that way. Real people usually try and mix up their sentence structures. If the bio language seems strangely uniform for any reason, it’s more than likely a fake.

7. There Are Many Profile Sections Left Blank

Someone trying to make an honest connection with someone is likely to fully complete their dating profile, in hopes of finding a good match. If you find large sections devoid of information, it’s a good indication that the profile’s creator was looking to rush through the creation process in order to begin scamming victims as quickly as possible.

8. The Person Works Hard to Avoid Meeting Up

They’re on a dating website in order to date, right? So if you’re talking to someone and they keep making excuses why they can’t get together with you but still seem as if they’re trying to lead you into something, be wary. There’s’ a good chance the reason they don’t want to meet up with you is that they aren’t who they say they are, or they don’t live where they say they live.

9. They Ask for Money or Some Kind of Financial Help

Reject. Immediately. Regular people do not ask total strangers they’ve met on a dating website for money for any reason. They may try and sweet talk you into believing they want to meet, but first, they just need help with some financial problem. Don’t believe them. They’re actively scamming you, and being scammed is about the best indication that you’re dealing with a scammer.

Many fake dating profiles are run using a chatbot program. This allows the scammer to create dozens or hundreds of fake profiles and then communicate with people, in real-time, using all of them.

Scammers usually try and set up their fake profiles as quickly as possible. They’re certainly not going to take the time to create matching Facebook, Instagram, or Twitter accounts. And real people almost always list at least one social network on their profile. If none are listed, it’s probably because the person you’re talking to doesn’t exist.

12. Their Likes and Dislikes Almost Exactly Match Yours

This is a red flag if the profile contacts you. It indicates that you’ve been specifically targeted and that the scammer has designed their fake profile to seem like a perfect match. It’s important to remember that a perfect match isn’t an exact match. No one likes and dislikes precisely the same things. If the profile that contacted you feels like your looking in a mirror, it’s probably a scammer.

13. They’re Too Forward, Too Quickly

Particularly if you’re using a dating site dedicated to love and relationships, profiles that get hypersexual too quickly are likely fronts for prostitution rings, or they’re trying to bait you into making a poor decision.

Of course, this might not be a red flag at all if the site you’re on caters to quick, anonymous hookups. The main takeaway is that the conversation should fit the venue.

14. They Try to Talk You Into Switching the Conversation to a Link They Send

There’s simply no good reason for them to do this. Dating apps exist to facilitate conversations. If someone is trying to get you to meet them somewhere else online, particularly if it’s a link you don’t recognize, they almost certainly have nefarious plans.

15. The Profile Features a Single Photo

More often than not, real people post multiple photos of themselves, to give potential matches a good idea of what they look like and what they’re into. Scammers usually only post one photo because 1.) the photo is stolen, 2.) they don’t want to take the time to download and post multiple stolen photos, and 3.) they know that the more photos they post, the more likely it is that you’ll be able to find one of them using a reverse photo search on Google, revealing that the photo belongs to someone else.

A single photo isn’t a dead giveaway. Some people are just lazy. But if the photo seems too good to be true, if it looks like a stock photo, or if a reverse image search seems to indicate dubious origins, reject the profile.

As we mentioned earlier, scammers frequently use multiple fake accounts. If they aren’t using a chatbot to run them, they’ll be doing it manually, which means they have to remember what they’ve said to each person that each profile is talking with. That’s no easy feat, and they’re likely to slip up and say the wrong thing to the wrong person. If their story changes or has odd, unexplained holes, they’re probably not who they say they are.

17. They Make Absurd Claims About Themselves

If you’re chatting with someone and they tell you that they’re famous, or that they’re a prince, a princess, or some other sort of royalty, or that they’re fabulously wealthy, be suspicious. Famous, billionaire, oil tycoon, princesses rarely use standard dating apps to find a mate. These are just stories cooked up to hook the gullible.

18. What You Can Do to Try and Verify a Profile

Many of the red flags above are cause to immediately reject the profile as fake, but some are just reason to be suspicious. By themselves, they may not indicate anything untoward.

The first thing to do when you encounter a profile that seems a bit fishy is to look more closely. If you find one red flag, and the profile is fake, you’re likely to find more. There are also a few other things you can do to try and confirm with a profile is real or bogus.

19. Search for Elements of Their Profile Bio on Google

This can tell you two things. If you find references in their bio in other places, and they point to the right person, then the profile is probably real. However, if they’re scammers and they use this profile bio frequently, you may find multiple profiles in other places, with other names, giving the exact same story. That’s a clear indication that the profile is fake.

20. Search For Their Profile Pictures with a Google Image Search

Scammers almost always either steal photos they find online or use stock photography to quickly create their profiles quickly. If they found them online, then you can, too.

A Google reverse image search will show you all the sites where the photo you’re searching for appears. You’re dealing with a scammer if you find the image on a stock photo site, a different person’s social media page, or if it appears to be a model from a random retail website or some other source.

Most dating apps and sites are good at identifying scammers. If you’re suspicious of a profile, but still interested enough in the person to try and confirm their identity, you can ask the dating service to look into the profile. They’ll either alert you if they decide the profile is fake, or simply delete the account. Either way, you’ll know.