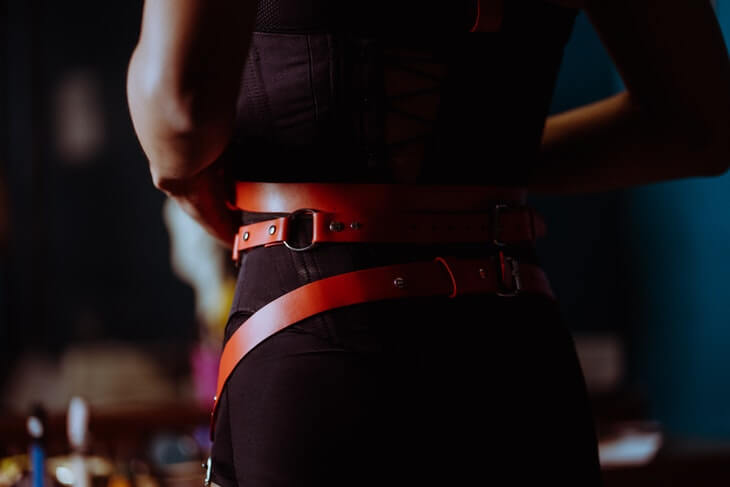 The bedroom is one of the most important rooms in your relationship. How your sex life goes down, both as an individual and as a partner to someone, will define more than you anticipate. It’s a widely accepted fact that if sexual gratification isn’t met, relationships tend to get a bit stale, and people are prone to ending them – at least for some relationships.

Now, say you’ve been in a relationship for a while. You’ve found your partner, the sex was amazing, and everything was going the way it should have – until it stopped. The bedroom just got a bit boring – it’s the same old same old, nothing is exciting about sex with your partner or partners anymore.

Well, lucky for you, humans have been exploring kinks and fetishes for the better part of our existence, meaning that there are more ways to explore your sexuality than you can ever try in a lifetime.

In this article, we’ll be covering some of them, as well as giving you a few tips on how to get into this fascinating world.

Kinks are all of the sexual kinks that you may or may not have. They’re not too different from fetishes – they define some of the things that get you excited about. The only thing that differentiates Kinks from Fetishes is that fetishes are mostly sexual acts themselves, while kinks don’t have to fall into the sex category.

Why Are Kinks Important?

Kinks are one of the few things that can make or break a relationship at its very core. While it takes many couples a lot of time to discover their respective kinks, you will usually know them when you see them.

However, people can hide their kinks very well, and just because someone appears in a particular way on the outside doesn’t mean that they aren’t into some kinky stuff. Everyone in the world, even the most conservative people, have at least some form of kink.

Kinks are especially important in new relationships. Couples who go through the honeymoon phase either push through the lack of new butterflies or let their relationship fade. Kinks, fetishes, and spicing up things in the bedroom is the key to a good, long,  and healthy relationship, just as much as trust and faith do.

Now that you’ve got the gist of what kinks are and why they’re important, let’s look at some of the things that tend to get people rowdy.

Dominance has always been one of the fetishes and kinks that seems to hit the most people. Every person in the world is different, but they’re all just various levels of dominant and submissive in any sexual encounter, be it sex itself or the buildup.

Dominance doesn’t have anything to do with sex, or at least it doesn’t have to. Just like most kinks, it’s a way of interacting with your partner and a whole type of relationship.

There are varying levels of dominance in relationships, kink-wise. Some are into lighter stuff, like a slight power play, while others are into heavier stuff, such as hardcore domination and slave play.

Bow, skeet, skeet, skeet – I want pics of feet, feet, feet! You’d be astounded at just how many people have a foot fetish. With the destigmatization of fetishes and kinks, many more people are exploring themselves, and many have found that feet might be the most attractive body part of their partner.

Traditionally, and in adult media, foot fetishes are portrayed as an exclusively male fetish, but you’d be shocked if you knew just how many women were into feet.

The exotic kink is a bit odd for many people because it touches on touchy topics such as race and sexuality. A lot of people are into exotic individuals, and what exotic means is solely up to them. People like to mingle with one of a kind, or at least seems to be one of a kind in their respective environments.

Remember that bombshell Brazilian girl from your high school? Ask yourself why her, out of all the pretty girls that attended your high school – it’s because she was unique, and she was exotic, thus making her more memorable than most.

While this can turn into a downright fetish with things such as sex tourism, it’s a kink for quite a lot of people, and they don’t even know it. We’re attracted to things that we don’t see every day, and that includes sexual attraction.

Soft play is one of the most common fetishes and is a total and complete counterpart to domination. Softplay and soft relationships are more and more common. As the world becomes increasingly harsh, people are looking for nurture and emotion rather than harsh domination.

This kink can turn quiet, kinky – and can lead to deep emotional connections between two people. We’re programmed to appreciate and desire nurture and a loving embrace, but many people seem to have it confused with sexuality.

Anything can be sexual if you want it to be sexual – the important thing is that you and your partner enjoy it.

Ever since people started copulating, they’ve been looking at ways to make the whole thing more exciting. By far, the best way we’ve managed to make sex more fun is by including sex toys in our sexual experiences.

Sex toys aren’t only fun – they’re overly abundant. Seriously, go take a look at your local sex shops listings – you’ll find hundreds of different things, all of which do something completely different. While some are made for sex itself, a huge portion of them is made to keep the fire going while sex is off of the table.

Things such as vibrating panties are gaining popularity at a massive rate these days, and you never know who might be wearing them. With that in mind, why aren’t you or your partner?

Submission is the opposite of domination, but not like soft play. Submissives enjoy being submissive and are usually accompanied by either a dominant or a switch. Again, these kinks are a lifestyle rather than a sexual preference but can be a sexual preference if the person chooses so.

Being a sub is all about being soft, obedient, and keeping your dom as happy as possible. It can be following rules – it can be simply listening to your dom – it can be anything you like, as long as you’re submissive about it.

When was the first time that you got sexually excited about something? Well, if you’re like most of us, it was by consuming some media. Now, this doesn’t have to mean that you watched an outright adult film and got a bit rowdy while doing so – it can be anything you want.

For quite a lot of people, it’s media characters they got their first sexual thrills from. Movie bombshells, videogame characters, even characters from books.

However, what ties all these characters together is that they don’t exist – they’re characters. With this in mind, what’s stopping you from pretending that they do? You can be anyone you like in the bedroom, and so can your partner. Take any possible role you like, such as a profession, a character, even something you imagined on your own! Anything and anyone can be a kink – you need to try it out.

Threesomes are the dreams of many boys and girls alike – but all kinds of sex that require more than two people are much more complicated than you might think. There are many logistics to the polygamy relationship, and it’s marvelous every step of the way.

Being in a polygamous, open, or casual relationship with someone is a fantastic way to explore your desires and let your partner explore theirs, all while strengthening the bond that ties you together.

Now, orgasm control is an increasingly popular fetish, but some people think that it’s a kink as well. Kinks don’t have anything to do with sex directly, while orgasm control traditionally does. However, you’d be surprised at just how many people can orgasm or have a sexual release without even being touched – it’s the people play that matters.

For males, it’s usually things such as chastity cages and dirty talk, but for females, the situation is far different. Most females that are into orgasm control are all about denial. They want you to want them, but they don’t want you to give them anything. Well, they do, but they don’t – it’s a bit complicated – but hey, so is human sexuality.

Voyeurism and cuckolding are two things that have been so prominent and popular in the past few years that it’s insane. So many people are into watching their loved ones getting pleased by someone other than them that it’s insane – it has even become a popular meme at one point.

Peeping toms have always been around, but people say that outright cuckolding and voyeurism are a way to gain so many thrills that it’s insane – we’ll trust them on that.

People like all kinds of genders, races, ethnicities – but some people are particularly attracted to different people. One way to make yourself look different from all the fish in the sea is to get a body modification, including tattoos and piercings.

These were shunned back in the past, but now anyone can do anything with their bodies. We implore you to explore yourself. You’ll be amazed at how many people find that particularly kinky, especially tattoos and piercings in particular places.

Bondage. You all knew that bondage was going to make an appearance on this list sooner rather than later, and here it is. Bondage is one of the oldest fetishes, and kinks are known to man and can trace their roots way back into ancient cultures that bound each other with a rope.

There is something so sexually releasing about being bound and having your movement restricted. The feeling of powerlessness, the thrill, the adrenaline – it’s a magical experience that everyone should attempt at least once in their lives, but make sure to know what you’re doing and start slow – bondage can be dangerous if you don’t do it right. Here is an additional resource on bondage sex that you might find helpful!

Golden showers. The world’s most popular kink finisher makes it onto the list next to the last addition, but it’s still one of the most shunned after kinks out there. We say embrace golden showers! If you think that you’d enjoy taking a leak on your partner (or getting a little leak on you), we say go for it.

CBT falls into the range of fetishes but can again mix with the term kink quite well. CBT stands for cock and ball torture and is known as one of the more dangerous and extreme kinks out there. People who are into CBT are practically never mildly into it – it’s one extreme or the other type of situation.

Describing CBT would be difficult, to say the least, and if you think you might want to give it a shot, we implore you to do your own research on the matter but tread lightly – you might get pain in the groin area just from looking at a video or two.

Kinks and fetishes are the two things that make life worth living, among others, of course, but you get the spiel. If you don’t explore your sexuality, what are you exploring? Sexual feelings are as natural and necessary as eating, drinking, and sleeping – so get out there and be the sexy beast that you are!