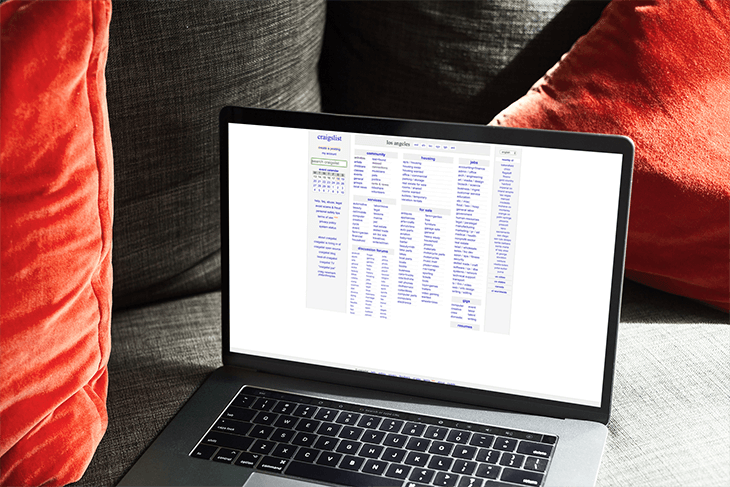 Wondering why Craigslist shut down its personals section? And what some good alternatives for Craigslist’s personal section are? We’ve got you covered.

Craigslist shut down its personals section due to the Fight Online Sex Trafficking Act, which was passed in 2018. According to Craigslist, the law seeks “to subject websites to criminal and civil liability when third parties (users) misuse online personals unlawfully.” Understandably, for a site like Craigslist that has many different sections where people can post jobs, sell furniture, etc. it’s difficult to strictly monitor the personals section. Also, while you can monitor the actual ads fairly easily, it’s harder to crack down on personal messages that may hint at one thing or another, but don’t spell it out in black and white.

Any tool or service can be misused, we can’t take such risk without jeopardizing all our other services, so we are regretfully taking Craigslist personals offline. Hopefully we can bring them back some day.

It’s wonderful that measures are taken to prevent sex trafficking, but it’s sad that tech companies have to fear people misusing their services and ending up on the wrong side of the law because of it.

But why all the fuss about Craigslist?

In today’s world of apps galore, why does anyone care about Craigslist shutting down its personal section? Well, many people relied on Craigslist for casual sex and hookups because it was anonymous. Many apps and adult dating sites call for a profile. Not only does that usually require a picture of your face, but also links to existing social media accounts to verify who you are.

Craigslist was different in that you literally posted an ad asking for what you wanted, with or without pictures and without linking it to any social media account. There are people, who for personal reasons, don’t want to be seen to be looking for casual sex. While most people in a bar on a Friday night might be doing so, the bar scene isn’t for everyone and there’s still some level of stigma attached to stating you want to get naughty five ways to Friday on an online dating site. Not so long ago, the only people who knew that you were looking to hook up were those you already hooked up with, or people at a sex party of some kind.

It is truly sad that you can’t have a site for personals without spammers, scammers and criminals line up to abuse it.

On the upside, a lot of apps caught on and started developing sites and apps that are meant for hookups and where you keep your anonymity intact, if you want to. Better security measures are in place on many of these sites/apps as well, preventing sex trafficking, scammers, sex workers, etc. from using them. If anything, Craigslist is known for having plenty of scammers as it’s a site open to the public. While their intention is to be a trading platform of sorts where anyone can post an ad, not everyone has good intentions.

Here are 5 best dating websites and apps for casual encounters and NSA hookups!

They label themselves as a hookup and anonymous chat app and that seems about right. Close to 32,000 reviewers at the AppStore give Kasual 4.5 out of 5 stars, so this is a more reputable way to go about NSA dating and hookups. And you don’t have to worry about anonymity. They need ask for personal information—not even your email address.

Nor does Kasual require a profile photo unless you want to add one. You can opt for a voice profile instead, or blur out your photo with their built-in photo editor.

Thankfully, Kasual also caters to everyone—including couples and the gay/trans community. However, no spammers or scammers are allowed, nor prostitutes and escorts—and they keep a lookout for those.

This is simply the kind of app that makes hookups that much more fun as you don’t have to wade through a ton of fake profiles and scammers. That said, there are always people trying to scam you wherever you go, even if the apps ban them as soon as they discover them, so stay aware!

If you’re looking for a site that’s been around for more than a decade and has a ton of members and various different services, then this is a great choice. It’s certainly a lot “dirtier” than Tinder. Adult Friend Finder is all about adult fun!

This is one of the world’s most famous dating sites. It’s not just about hookups here, but about having an affair. If you get off on dating married men or women, this is your kind of dating site. Though these days you’ll also find plenty of folks in open relationships using Ashley Madison.

Ashley Madison is all about privacy for the sake of keeping affairs private, now more than ever as someone hacked their database a couple of years ago and created a huge scandal. They stepped up and made corrections accordingly though, so chances are it won’t happen again.

You can blur your photos so that people can’t see them unless you let them, to ensure your spouse doesn’t find you on the site…or for that matter: your boss or college professor.

Ashley Madison has a special feature for travelers (much like Tinder), where you can show you’re going to a certain city and are looking to meet someone for a hookup there.

The crowd on Ashely Madison varies—some want NSA dating, some hookups, some long-lasting affairs… The only thing to remember is that many members are previously engaged. Meaning married.

This site was designed with adult dating, hookups and kinky stuff in mind. Here you can find people who share your fetishes, or simply someone who wants to hook up for the night.

Owned by the Together Networks, this site has been around for a long time and you can find people from all over the world here. With 120k weekly active members, you have plenty of choice as well.

Unlike AdultFriendFinder, your profile has to be clean. Meaning no nudity or pornography. They also actively check for fake photos and approve every photo you upload.

FetLife, as the name implies, is for people with fetishes. Like Adult Friend Finder, it’s all about community. In this case, a community passionate about being kinky in different ways. That means that people are openminded and supportive. There are plenty of blogs, discussions boards and so forth that you can partake in. Of course, members are actively looking for others to get kinky with as well!

Here you have to confirm your profile with an SMS, meaning bots are unlikely to roam the site. Being a closed community, it makes sense it’s guarded. However, if you’re looking for strict anonymity, you might prefer Kasual.

If you’re missing Craigslist Personals so much and seeking a replacement, we’ve listed top 5 classified websites like Craigslist for casual encounters. Let’s check them out!

This is a personals site much like Craigslist (i.e. people use ads) and some people have reported having success using it. However, it’s not as big and widely used as Craigslist. On the plus side, it has some stricter security measures than Craigslist, but people also report being blocked for no reason.

As Tinder is extremely poplar and a lot of people use it to find dates, not hookups, people get tired of swiping their way through hundreds of thousands of people in the bigger cities just so as to find a hookup. DoubleList is a bit “dirtier” if you so like, with people being more up front about looking for sexual encounters. People don’t exactly dress it up, so to speak, like they do on Tinder.

In short, if you want a Craigslist ads system, this is likely the page for you.

“Sugar babies,” “hookups” and “meet and fuck” are the categories you see on their homepage, together with the different states listed where you can click through to your state. Each state then offers classifieds, like home rentals, but the main categories are centered around dating, escorts, etc. It feels kind of unnecessary to have the other classified ads.

A lot of people have reported that it’s mainly ads to escort companies, as opposed to people posting private ads. On top of that, it’s filled with photos of women taken straight from Google… In other words, you’ll find lots of people on here that have less than noble intentions.

Locate is a classifieds site that actually deserves the name. Here you find ads of all kinds, including personals. You can look for long-term relationships, hookups and personals services (meaning sex trade). However, lots of people report scammers using the site. This is not unusual for any ads site though and the only way to avoid as many scammers as possible is to join a dating app with strict regulations. It’s also a matter of smartening up and knowing if someone asks for personal information (where you live, where you work, credit card details, social security, etc.), or payment, they aren’t a regular person wanting to hookup, but someone wanting to make money off you or worse.

This site has significantly better reviews than Locanto. Then again, if you check the reviews on TrustPilot you find some that advertise cocaine (no kidding), spells (again, no kidding), real and fake documents…the list goes on. And that’s on TrustPilot. That’s not to say that the site only has spammers using it. As mentioned previously, all classified ads sites will attract people trying to scam others, that doesn’t mean a site doesn’t deal with them, or that there aren’t a million more real ads on there.

Kijiji is a Canadian site and while it doesn’t offer a personals section, it has a “Friends and Networking” section, as well as a “Missed Opportunities” section. This site seems a lot more spam free, if not scam free. The ads on here are varied in the Friends and Networking section and doesn’t give off a fake vibe. That said, you should use the same caution as with other sites.

If you aren’t based in Canada, you can simply use it as a site for finding online friends with benefits.

There are plenty of options to choose from if you’re looking for a Craigslist Personals alternative. And some, if we may say so, are better than others. At least if you want to avoid spammers, scammers and sex workers. The classified ads sites listed, save from Kijiji which seems a bit “cleaner,” still have plenty of those, unfortunately. Apps, while never entirely free from scammers either, have stricter measures in place and also members are constantly reporting back regarding suspicious behavior.

Regarding dating safety: as you would when meeting people in a bar, practice common sense. Don’t hand out personal details such as where you work, or live, don’t pay for anything and don’t agree to meet up in a secluded place until you’ve met someone in public, plus always tell a friend where you’re going.

If online sex is your thing, then lots of apps and sites cater to that as well, such as Adult Fried Finder. And during times like these when the Coronavirus is a concern, virtual sex may be better than the real deal. Be patient—you’ll soon be able to meet with people face-to-face again.

Having created this list, we are happy to see that there are plenty of apps out there that cater to people who are looking to feed their sexual side and have supportive communities that embrace people’s kinks. There’s certainly no shortage of hookup apps and Craigslist alternatives out there!